Skip to content
Home/News/CitieS-Health pilot project in Barcelona: Selection of the research question with the citizens

CitieS-Health pilot project in Barcelona: Selection of the research question with the citizens

During the first phases of the CitieS-Health pilot project in Barcelona, ​​we worked face-to-face with the citizens to obtain their insights, which will ultimately help defining a research project that will be implemented in Barcelona. Previously, we developed and distributed a survey in order to shed light on Barcelona residents’ main concerns on air pollution and health. Around 600 people responded to the survey. This collaboration with the citizens helped scientists to create a map of concerns in the different parts of the city and to narrow down the potential topics of study to the effects of air pollution on mental health or respiratory health. In a new event, discussion tables with citizens identified eight potential research questions on the selected topics.

The eight potential questions were posted in a second survey so that citizens voted which research question they would like to investigate together with scientists. The most voted research question was officially presented at the first #Citizens4Science event last February 6th at the Ideas for Change headquarters in Barcelona.

The research question of the CitieS-Health Barcelona pilot project 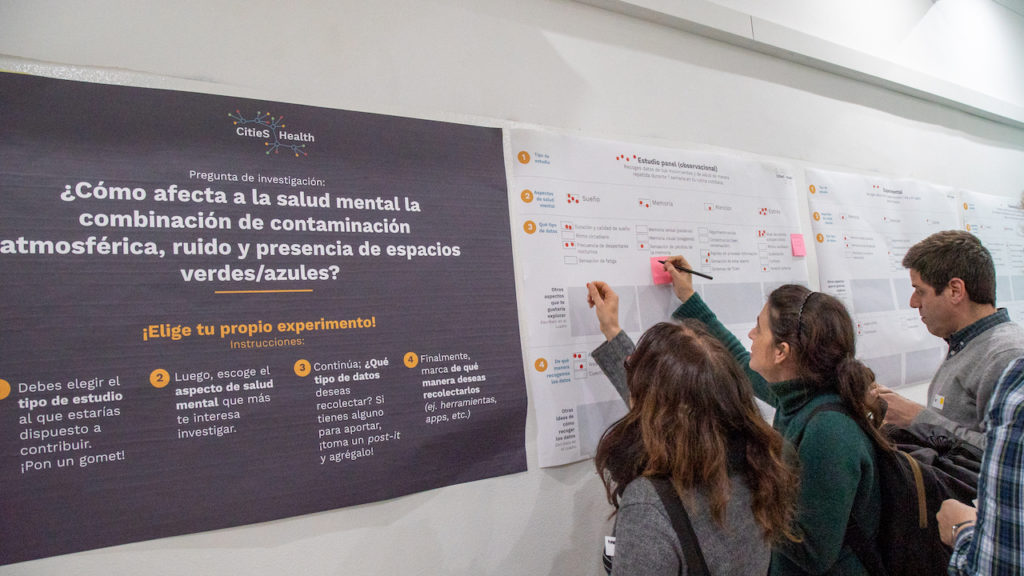 This meeting was also an opportunity to meet with the citizens and identify with them what type of study design they would like to do in order to answer the most voted research question. The decision was to use an observational study in which citizens provide  repeated measures of mental health outcomes on different days. The results on mental health questions on the different days will be related to the air pollution concentrations of each day to assess if a relationship exists. In addition, we will explore if exposure to noise or to green or blue spaces modifies this association. In the coming weeks, the first version of the study protocol will be written and will be circulated to citizens to incorporate their feedback. Once the protocol is finalized, the project will enter the new phase of implementing the study and starting data collection.

More information about how to participate in the Cities-Health Barcelona pilot project: